Charlie's Angels- Child of the '70s 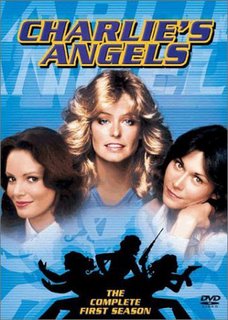 Here is an easy test to see if a woman of a certain age is a true child of the '70s. Turn on the theme to Charlie's Angels and see if she subconsciously assumes the pose.

C'mon ladies, you know what I am talking about. Which angel were you? Did you wear you hair like Farrah or did you have that funky Dorothy Hamil haircut.

Confession is good for the soul, so spill beans and share the goods.

And if you are really feeling nostalgic you can listen to the theme here.

When I was 15, I wanted the Farrah 'do very badly, but was cursed with flat hair. A hair stylist once convinced me that I could "train" my hair to flip back. It never quite worked out the way I hoped. I ended up getting a very curly perm instead.

Perms were big then.

I had the Farrah hair briefly, after I left the salon one day and before it rained. Of course, my version was brunette, not blonde.

My story is the same as Donna's - the hairdresser said my curly hair could be "trained." LIAR!!!

Meanwhile, the cool girls in my junior high school at the time who could achieve the flip all had those big combs with the giant wavy handles that stuck out of their back pockets just-so... ooohhh how I wanted to be them...!


And his name isn't anything remotely like Charlie, either :)

Child of the 70's indeed

I remember those combs.

Well now. In WV, everyone wanted the feathered Farrah look but I had straight, flat hair. So I gaev it a whirl but ended up with some weird thing that was none of the above. I liked Starsky and Hutch better anyway.

I admit, I had the Dorthy Hamil do for a bit... But I think we all wanted to be Farrah.

I couldn't have a "Hamill" if I tried. My hair lended itself more to Farrah's. I still love long and big hair.

You don't know what you're missing. Salons are much more than haircuts. I may go after work for a massage and facial. Everything about it is great -- the utlra-hot steam shower, the big fuzzy robe, the massage (oooooh ahhhhhh), the soothing facial.

Wow, I really need that today. Thanks Jack, goood idea.

My mother refused to allow me to have feathered hair. She thought they style was very, very ugly. In retrospect, Mom was a genius.

I had the Dorothy Hamill. I was maybe 6 or 7 and it looked really cute.

Thank goodness the Farrah looked awful on me or I probably would have tried the 'Rachel.' (Remember? from Friends? I bet it still gives Jennifer Aniston nightmares and she started it)

My hair was and is super straight, no farrah for me...

I just had a simple Jewfro, no fancy haircuts for me. When I got older I wore it as a flat top for around 10 years or so.

I used to have short hair but with "wings" or the feather look. My hair is very thick and curly so I couldn't do any of the girls hairstyle if I wanted to. Actually I don't think I really cared at the time. Though I did watch the show, my fave shows at the time were Happy Days, Laverne & Shirley, Love Boat and Fantasy Island.

Oh, I forgot to add though I was very young at the time, I always wanted long straight hair, just like Cher's.