We're on the verge of another New Year and in the midst of so many changes that my head is spinning. I am doing my best to view all of these as opportunities. Doing my best to maintain a positive attitude and take it on as best I can.

But I would be lying if I said that sometimes it feels like everything is harder than it should be or that there aren't moments where I want to stand outside and scream at the universe to STFU.

I feel a bit like Tevye in the I wish I was a Rich Man scene. While things could be much worse they could be much better and would that really be such a stretch.

But then again within the last week I learned that one friend lost her nine month old son and another lost her mother and sister. Lost of course being the euphemism that some people use to say that someone died.

August certainly had its moments. Grandpa died, my sister got married a week later and then we moved. It really is the kind of thing that makes some of us go WTF, but that is how life goes. And my job as dad is to show these kids that we can handle anything that is thrown our way so that is what I do.

I put on the dad mask and pretend that none of this bothers me and that I haven't a care in the world.

So here I stand on the verge of another new year and some things are clear to me. Writing has to become a much bigger part of my professional life than it is. I need to make the bigger push so that I can take the pieces of my story and weave them into a larger tale.

I have something here that can be special. I have the pieces of the puzzle and now all I need to do is figure out how to put them together. And maybe that is part of the change I feel. Maybe all these moments of carrying that weight on my shoulders has led me here.

I like having two blogs. The main one is still over here but this one is alright too. This one here is where I learned how to blog and a million other things so I can't and won't just let go of it.

It is a good life.

This was part of the Just Write project. 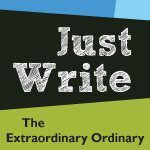 Punching At The Wind

A new insertion for Fragments of Fiction


Have you ever seen a one-armed man punching at nothing but the breeze?

Johnny stood in the doorway and looked out at the cars driving by on the street and remembered days long gone by when he would jump in the Camaro and just drive.

Those were days to remember. That car may not have been alive but it might as well have been a dog or a horse. It was a big part of him and it shared more than a few adventures. If those wheels could speak they would told a colorful tale or two.

They might have mentioned quiet moments in the mountains or sunsets painted across a bright blue sky and set against the sea. They might have spoken of the persons who spent time in those places and shared their thoughts about how they impacted and influenced the life of that driver.

And though there had been more than a few there was still only one who mattered more than the others. Just one whose memory had never left and whose name was never far from his lips. She had turned his life inside out and upside down.

They had sworn a blood vow to never let go of each other and had done the things that they could to ensure that it would last.

But that was then and this is now.

Life is nothing but a series of moments in time set against the backdrop of the people who share them. It was a lesson that Johnny had learned all too well. There had been moments of triumph and moments of tragedy. He had tales of sorrow, had gained and garnered more than a few scars.

They say that those who do it well find life to be easier and more enjoyable, or so it was said. Johnny didn't necessarily buy into it wholeheartedly. He tended to believe that in order to enjoy and appreciate the sweetness of life you had to experience some of the other side.

Not to mention that even if you recognize the moments you still have to be willing, ready and able to take advantage of the moment. And that was one thing that tied all people together- missed opportunity.

It was something that he knew about and had experienced. It happened back in that past life he used to live. Back when he and June had shared their hearts and lived a life together.

They had missed their window or at least that was the explanation she gave for leaving him. Well, it was one of them. She had thrown out a bunch of other reasons and excuses for why they couldn't be. With the perspective of time it was possible for Johnny to see more clearly how things had unfolded and to recognize how close they had come to overcoming the consequences of their confusion.

One step to the left and a jump to the right would have helped them to avoid a few of those land mines and had they done that the harsh words they exchanged might not have been uttered. But that hadn't happened and instead they had gone down that same rocky path that so many other couples walked upon.

Battered and bruised they turned away from each other. Stopped talking and ceased communicating. Two people who used to hate not being in touch learned how to be alone and apart.

It was the picture of June in the blue dress that changed things for Johnny. He came across it unexpectedly and was surprised by the reaction it caused in him. She was simply stunning and it took great effort on his part not to pick up the telephone to try and call her.

The pain of the disconnect and the distance came rushing back. For a moment he let himself bathe in it. He looked at her picture, remembered what it was like to kiss her and got lost in memory. What had once seemed impossible had happened.

All these years later he could hear June tell him to promise to find her no matter what happened. Remembered laughing at her and asking what he should say if she wouldn't talk to him. She told him to remember that she would be mean. Said that he should ignore that and remember that she wasn't being a bitch because she didn't love him but because she did.

He said that was the most ridiculous thing he had ever heard and she told him to shut up and listen. "Shut up and listen" had turned into a joke for them with deep meaning behind it. If ever they had a fight it was something that one or both of them said.

Johnny stared at the picture and said the words out loud "Shut up and listen." As expected there was no response. So he took a deep breath and told himself that it was time to return to reality. June was living her life and he was living his.

Later that night as he went to sleep he swore that he heard her say "Shut up and listen" and then promptly dreamed about the reunion that they always knew would take place.

When he woke up in the morning he didn't remember the dream but in the back of his mind he still felt her touch and wondered if somewhere she could feel his.
at September 26, 2011 No comments:

Email ThisBlogThis!Share to TwitterShare to FacebookShare to Pinterest
Labels: Fragments of Fiction

Who Knew that Blues Clues Could Help You Get Lucky

How Babies Learn To Speak

Email ThisBlogThis!Share to TwitterShare to FacebookShare to Pinterest
Labels: Languages

A Few Posts To Read

Recent posts from here and there and a couple of old ones mixed in for your reading pleasure:

Transitions and Delusions
Time Stand Still
I Really Should Be Packing
The First Day of School
It Is Called Life
The Wisdom of Words
The Heart Wants What The Heart Wants
at September 08, 2011 No comments: