All Gave Some, Some Gave All 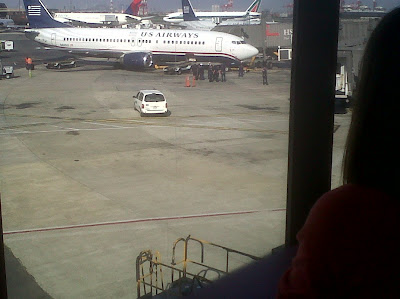 No more bleeding no more fight
No prayers pleading through the night
just divine embrace, eternal light
in the mansions of the Lord

As we walked through the airport I noticed a crowd standing by the window. Some 20-25 people were staring out the window at a plane and some police cars, at least, that is what I thought it was. But then I took a harder look and got a bit choked up.

If you look at the right side of the picture you will see a group of men and an open cargo door. The men are a mix of police and marines in dress uniform. And just peeking out of the open cargo door is a casket draped in a flag.

I can't tell you a thing about who is inside there. Don't know whether he was in Iraq, Afghanistan or somewhere else. Logic says that Iraq or Afghanistan is the most likely location and he is probably a younger man or woman.

For a moment we stopped and stared. We were part of a group of people who sat there in silence, lost in our own thoughts. A group of strangers convening in an unscheduled exhibition of one of the sadder moments in life.

Somebody's child was in that box. Somebody's son or daughter lay there dead and broken never to walk under the sun again. And I felt so very badly. It really caught me by surprise how strongly it hit me. My son asked me what was going on and I explained to him as best as I could.

I couldn't provide him with specific details because I really didn't know. So I kept it simple and told him that someone lost their life trying to protect us. I suppose that some people might think that to be too trite an explanation or would want to talk about the political message that I sent or didn't send.

But that wasn't appropriate for a young child. He doesn't need to engage in a discussion about whether he/she died in vain or for a good cause. All he needs to know is that someone died and that it is sad. That we don't want to fight in wars, but when we do we fight to win. That what we have isn't free and that he is lucky to be living here.

That he should be grateful for all that he has. That is a lesson that we all can benefit from. So to you the unknown soldier and your family I say thank you and I am sorry.
at June 19, 2010

Yes, heartbreaking. I know it's no consolation to the soldier's loved ones, but I think it is a blessing that so many people -- even just strangers standing in around in the airport -- were able to mourn and pay respect to the passing. This is a reminder that all the names that scroll on the nightly news aren't imaginary -- they are real men and women who will come home in a similar way. We need to stop and notice and respect.

It really is. Just terrible.

No, they are not imaginary. I have been thinking about it all for the past few days. Depending on where you live it can be very easy to ignore the war as there are few daily reminders of just how severe the consequences may be.

I live right outside of Fort Bragg and Pope AFB so we are constantly reminded of the sacrifices being made. I wish everyone had those reminders.

It makes a real difference.