Every year I try to come up with a poignant post that captures the feeling of the day for me. Most of the time I feel like I come up short.

This year I decided to just write a few words, link to some old posts and include perhaps a word or two. Of the posts I linked to below the two that really grab me are Eicha- One Last 9/11 Post and As The Bodies Fell- He Played.


I wrote As The Bodies Fell- He Played three years ago and in some ways it is the most significant 9-11 post I have written. The image of my son playing with his blocks while I watched people jump from the towers is seared into my memory.

I remember the feeling of pain and anger. I remember thinking about how many children were going to go to bed as an orphan, or if they were lucky with one less parent. And I remember hugging that little guy and wondering what sort of world he was going to grow up in.

This year decided to run it again.

Eicha- One Last 9/11 Post requires a bit of explanation. In general people associate Eicha with Tisha B'Av, which is a day of mourning within the Jewish calendar. On that day the Book of Lamentations (Eicha) is read. But in this context it actually refers to chanting. In general when Jews read from the Torah there is a style with which it is done.

We do it differently on Tisha B'Av. Eicha refers to that style. The audio post is of a man chanting the final messages of victims of 9-11 using the Eicha style. It is hard to hear.

Anyway, here is a link to some old posts from the past. 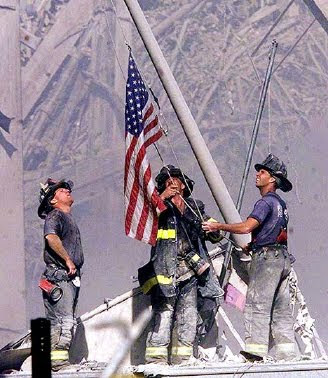 Email ThisBlogThis!Share to TwitterShare to FacebookShare to Pinterest
Labels: 9-11, Terrorism

Bless u on this day my friend...

Hope you have a great weekend.

I hate remembering the day. But I hate even more knowing we may forget the victims of that day.

It scares me to think that people might forget all that happened.