During the past several years the ancient lady known as the Shmata Queen has complained to me that she can't figure out how to use the remote control for the television. Since I have a puckish sense of humor I tend to refer her to the picture below. 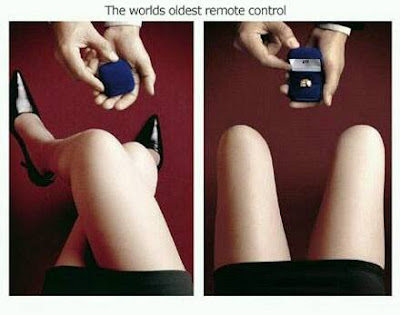 No matter how many times she sees it she still cracks a smile, albeit a tiny one. I suppose that it might help if I stopped making comments about her advanced age and or stopped offering to get her a walker. Excuse me while I duck and cover.

Ok, now back to the post. I must admit that the old girl has a point about the remotes growing more and more complex. In an effort to make life simpler the manufacturers have created a crazy configuration of beeps, bells and whistles that do more than adjust the volume and change the channel.

Now from the comfort of your recliner you can turn the lights on/off, adjust the stereo, turn on/off the microwave/oven/stove, play DVD/VHS, open/close the garage, feed the dog/cat and fire a Taser at the kid on the porch whose sole mistake was trying to sell you magazine subscriptions.

If you think that I am exaggerating just look at the picture below. But hey, it is a wireless world baby. Time to get with the program, or so they tell you. Technology is a wonderful thing. Even the most intimate events can be handled from a distance, although you would think that Ma Bell's push to reach out and touch someone has some real validity.

So here we are living in a material world with children who don't know from Black & White television sets, don't understand jokes about rabbit ears or how you could use tinfoil and a wire hanger to improve reception.

They don't know about Rotary phones. Dick Tracy's watch is not fantasy and it is becoming less and less unusual to see younger kids walking around with cellphones. They don't stress out about technology, it is a part of their world.

In fact if you have Luddite tendencies or are just confused about how to change the channel on your television the best piece of advice I have is to get yourself a six year-old child. All you need to do is hand them the remote and you can guarantee that in less than a minute they'll have that set buzzing.

And if you don't believe me you can ask the old SQ how she solved her problem and she'll confirm it.

P.S. I wasn't referring to her major malady of having to admit to being born in the land of the burning river. That is one thing that only time and copious amounts of therapy can fix. ;)

I HATE remotes! But then again, I hate the TV too...(which is prolly why I have no idea how to use the remote).

Signed,
The Shmata Queen from Cleveland

Jack: on the same subject, have you come across this from NotAlwaysRight.com?:

(I get a call for troubleshooting from a lady who says her remote doesn’t work.)
Me: “Ok ma’am, could you try changing the channel for me? Tell me if a light flashes on the remote.”
Lady: “Ok.”
(There are a few loud beeps from her phone in my ear and she comes back on the line.)
Lady: “Nope, no flashing.”
Me: “Ma’am you’re trying to change the channel with your phone, not the remote control.”
Lady: “I can’t find the clicker, and I know my neighbor changes channels with her phone.”
Me: “Ma’am, that’s just not possible.”
Lady: “Don’t accuse me of lying! I saw her do it with my own eyes.”
Me: “…”
(I try for 10 minutes to explain to her why she can’t use her phone, and even make a futile attempt to troubleshoot her phone.)
Me: “Ok, well it looks like your satellite receiver isn’t compatible with your phone.”
Lady: “Yes it is. My neighbor and I have the same phone and same receiver. NOW HELP ME, DUMBA**!”
Me: “Ma’am, do you have a cordless phone?”
Lady: “Yes!”
Me: “Ok ma’am, let’s try reprogramming your phone. What I need you to do is press and hold the ‘off’ button for five seconds. This will clear the old code, so we can put the new one in.”
Lady: “Ok—” *click*
(I hear my supervisor a few rows away from me bust out laughing.)

All I can do is turn on the tv. The other stuff is too esoteric for me.

People hate what they do not understand.

Yep, that is a good one.

Not Quite Where It Began

It is not quite where it began but this place is a big part of the pieces of the puzzle that make up that particular part of life. The one I...