A Different Sort Of Urinal 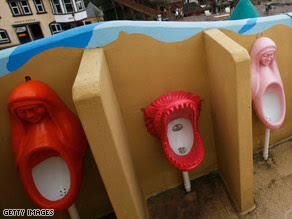 Something tells me that this is going to piss people off.

BEIJING, China (AP) -- They're flush with pride in Chongqing, where a recently opened porcelain palace features an Egyptian facade, soothing music and more than 1,000 toilets spread out over 30,000 square feet.

"We are spreading toilet culture. People can listen to gentle music and watch TV," said Lu Xiaoqing, an official with the Yangrenjie, or "Foreigners Street," tourist area where the bathroom is. "After they use the bathroom they will be very, very happy."

I wouldn't use that dragon-urinal. What if it bites?

Using the Precious Virgin Mary as a urinal is a travesty and a huge insult to millions of believers of the Blessed Mother. Leave it to communists to be so rude and inconsiderate. Your judgement day will come!

Is there a Koran urinal to go along with the Virgin Mary? What about a Buddah?