Python-Biting Off More Than It Can Chew

See what happens when you don't chew your food. 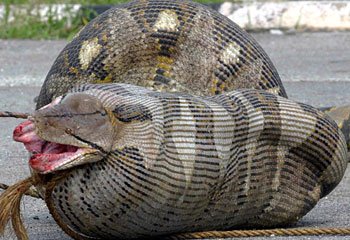 "A LITTLE bloating after a big meal is an occupational hazard for pythons. But this unfortunate creature found itself unable to slink away and sleep it off. In fact, after swallowing a pregnant sheep, it couldn't move at all.

Firemen in the Malaysian village of Kampung Jabor, about 190km east of Kuala Lumpur, easily caught it after it was spotted on a road.

Conservationists were yesterday still deciding whether to keep the 90kg snake in a zoo or release it back into the wild.

Pythons eat no more than once a week but when they open their incredible hinged jaws, anything is fair game.

This 5.5m python found its eyes were definitely bigger than its belly.

In July surgeons were forced to operate on a 4m Burmese python after it inadvertently swallowed a queen-size electric blanket.

Humans also have become victims. In 1972 a python in Burma swallowed an eight-year-old boy."

Just in case you are wondering one of my fear is being eaten by some kind of animal. On the other hand, I am too mean for that to happen.

I should add that this python fared better than the one that tried to eat the alligator.