Why Don't We Hear About Israeli Refugees?

If you spend any time reading the news you'll find many stories about Lebanese refugees. There are lots of pictures of people fleeing the war, of crying women and children, destroyed buildings and an explanation laying the blame at Israel's feet.

As you review the stories you'll typically see that there is some mention of Hezbollah having fired rockets upon Israel. It is often downplayed. 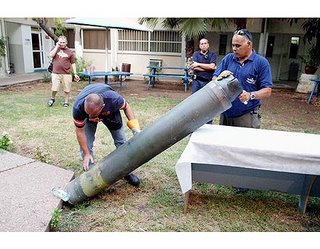 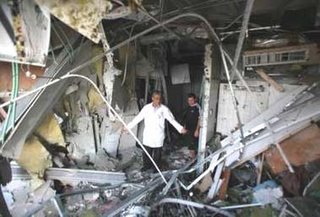 You don't really see the pictures of the rockets. And you don't see too many photos of the damage they cause.
It bothers me. There are two sides in this war and it is just not right to cover both of them.
at July 29, 2006

Email ThisBlogThis!Share to TwitterShare to FacebookShare to Pinterest
Labels: Israel

Bothers me too. On the news here they (almost) NEVER show anything about the Israelis who have had to leave their homes and jobs.

My Mother-in-Law has been storing an entire clan of Northern refugees in her house for the past week or two, but is kicking them out today (sending them to her to relatives in Jerusalem) mostly because she's run out of food to feed them.

Very true. I think Hevbollah, if nothing else, has the PR thing down pat. Makes me wonder why the Israelis miss on this one...is it deliberate or a strategic error?

one of the tv news show i was watching said that israel does not allow them to say too much about what is going on, where the rockets have been falling, because they don't want to give the hezbullah any information.

I agree, the bias of the MSM is so great as to be a slap in the face and a kick in the seat, beyond insult to intelligence, to decency, to morality, to ethics. It is beyond reprehensible and it is a new low to any journalistic principles of fairness, should such even still exist, which I doubt. The anti-Israel bias, bigotry, prejudice in the MSM one does not even have to scratch the surface to expose, it oozes freely. If there was ever a time in history where freedoms of the press do not serve lovers of freedom or those who wish to live free, it is now.

It seems to be a universal problem.

Your MIL should be thanked.

Israel has had PR problems for years.

I hope that here in the blogosphere we are able to help combat that.