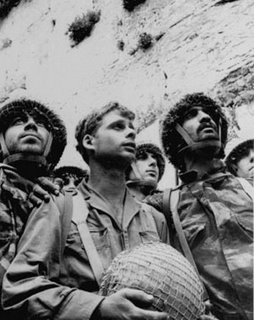 It is Yom Yerushalayim. It is a day that celebrates the reunification of Jerusalem. I am just one of a number of other bloggers who have blogged about this day, some far more elogquently than I have.

The picture on the right of the paratroopers liberating the Kotel is probably one of the more famous photos of Israeli history.

In the winter of '95 I had the privilege of meeting one of the gentlemen in the photo and hearing his recollection of the war and the day that Jerusalem was finally reunified.

It was an amazing story that I'll never forget. I can't begin to do it justice so I'll do as many others have and provide you with links to the recording of the recapture of the Old City and the transcript of the recording.

"This is Mordechai Twersky reporting from :

What you are now about to hear is perhaps one of the most riveting recordings in the modern-day history of . I refer to the dramatic sounds of Israeli Defense Forces entering and liberating ’s and the Western Wall on . You hear the sounds of gunfire. You hear the footsteps of Israeli soldiers, as they draw closer and closer and as General Uzi Narkiss instructs them and asks to be shown where the Western Wall stands. We hear a triumphant Brigadier General Shlomo Goren, later to become the Chief Rabbi of , as he recites the memorial prayer and sound the shofar, as Israeli soldiers weep with sorrow over their comrades killed in combat.

Listen closely to this piece of history, which is housed in the archives of the Avi Yaffe Recording Studio in .

Colonel Motta Gur [on loudspeaker]: All company commanders, we’re sitting right now on the ridge and we’re seeing the . Shortly we’re going to go in to the Old City of Jerusalem, that all generations have dreamed about. We will be the first to enter the . Eitan’s tanks will advance on the left and will enter the Lion’s Gate. The final rendezvous will be on the open square above.
[The open square of the .]

[Sound of applause by the soldiers.]

Yossi Ronen: We are now walking on one of the main streets of towards the . The head of the force is about to enter the .

Yossi Ronen: There is still shooting from all directions; we’re advancing towards the entrance of the .

[Sound of gunfire and soldiers’ footsteps.]

[Yelling of commands to soldiers.]

The soldiers are keeping a distance of approximately 5 meters between them. It’s still dangerous to walk around here; there is still sniper shooting here and there.

We’re all told to stop; we’re advancing towards the mountainside; on our left is the ; we’re now in the opposite the Russian church. I’m right now lowering my head; we’re running next to the mountainside. We can see the stone walls. They’re still shooting at us. The Israeli tanks are at the entrance to the , and ahead we go, through the Lion’s Gate. I’m with the first unit to break through into the . There is a Jordanian bus next to me, totally burnt; it is very hot here. We’re about to enter the itself. We’re standing below the Lion’s Gate, the Gate is about to come crashing down, probably because of the previous shelling. Soldiers are taking cover next to the palm trees; I’m also staying close to one of the trees. We’re getting further and further into the City.

Commander eight-nine here, is this Motta (Gur) talking? Over.

[Inaudible response on the army wireless by Motta Gur.]

Uzi Narkiss: Motta, there isn’t anybody like you. You’re next to the Mosque of Omar.

Yossi Ronen: I’m driving fast through the Lion’s Gate all the way inside the .

Command on the army wireless: Search the area, destroy all pockets of resistance and make sure to enter every single house, especially the holy places.

Uzi Narkiss: Tell me, where is the Western Wall? How do we get there?

Soldiers: [reciting the ‘Shehechianu’ blessing]: Baruch ata Hashem, elokeinu melech haolam, she-hechianu ve-kiemanu ve-hegianu la-zman ha-zeh. [Translation: Blessed art Thou L-rd G-d King of the Universe who has sustained us and kept us and has brought us to this day]

[Soldiers sing ‘Hatikva’ next to the Western Wall.]

Rabbi Goren: We’re now going to recite the prayer for the fallen soldiers of this war against all of the enemies of :

[Translation: Merciful G-d in heaven, may the heroes and the pure, be under thy Divine wings, among the holy and the pure who shine bright as the sky, and the souls of soldiers of the Israeli army who fell in this war against the enemies of Israel, who fell for their loyalty to G-d and the land of Israel, who fell for the liberation of the Temple, the Temple Mount, the Western Wall and Jerusalem the city of the Lord. May their place of rest be in paradise. Merciful One, O keep their souls forever alive under Thy protective wings. The Lord being their heritage, may they rest in peace, for they shalt rest and stand up for their allotted portion at the end of the days, and let us say, Amen.]

[Soldiers are weeping. Rabbi Goren sounds the shofar. Sound of gunfire in the background.]

(The historic radio broadcast of the liberation of the and the Western Wall
was researched, transcribed and translated by Yitschak Horneman / Quality Translations, Jerusalem)

Email ThisBlogThis!Share to TwitterShare to FacebookShare to Pinterest
Labels: Israel

Thanks for the mention :-)

How neat that you met one of those soldiers! That must have been an absolutely fascinating story.

I have always loved that picture.

which one did you meet? I heard that the one in the middle became a dr. Not sure if thats 100% true tho.

Always been my favorite pic about Israel.

A great day in history. There are so many emotions about it but the prayers, the singing, and the shofar sounding all testify to great awe and joy of being able to stand at the Kotel as in days of old.

It was my pleasure.

On the left side. His name is Ziggy (forgive me, I can't remember his last name) and when I met him he was running a kiosk in Afula.

Wow, reading that transcript gives me chills. To think without the brave actions of those men I would have never been able to visit the Kotel.

I heard one of those soldiers now sells jeans in amarket in New York, another lives in the town of Ofra
ps dont you feel you too should be living in Jerusalem instead of way-off Cleveland