The Dodgers of My Youth- That Infield

To the right I present to you a photo the Dodger infield of my youth: Ron Cey, Bill Russell, Davey Lopes and Steve Garvey.

It never occurred to me that this unit would one day be separated. Back to that in a moment.

In those days I lived and breathed baseball. I knew every single player on the Dodgers. I knew their position, their batting averages and more. I loved to play that game.

I was an outfielder and truth be told Dusty Baker and Reggie Smith were the guys I looked up to more than the infield in large part because I thought that the outfield was just cooler than playing first or second.

But I would be remiss if I didn't mention how much I liked The Penguin, Ron Cey. I liked him because he was a Dodger. As a young and impressionable boy just being a member of the team was enough to impress me, but in Cey's case there was a little more to it.

About 30 years or so ago he was one of a number of players who made an appearance at a local bank to sign autographs and press the flesh. I have strong memories of him and Bill Buckner taking the time to speak with me. They could have just signed the picture and told me to move on, but they didn't.

Don't get me wrong, they didn't spend a ton of time speaking with me but enough to make a lasting impression. Every now and then I think about telling The Penguin about that day at the bank.

You see for the last 15 years or so I have seen Ron Cey weekly at my gym. I pass by him in the locker room, wander by in the showers or see him entering or leaving the building. And in all that time I don't think that we have said more than the occasional hello.

In part that is because I respect his privacy. I never wanted to be a pesky fan and from time to time I have seen him patiently answer questions from others. In part it is also because I think that it might be odd to walk up to him dressed in nothing more than a towel and start flinging questions his direction.

Now I know there are at least two other Dodger fans that read this blog. You might be interested to know that Tom Niedenfuer goes to the same gym. We tried rattling him at the free throw line with a few choice comments.

"The Los Angeles Dodgers of the 1970s were a team of winners. Three National League pennants and three appearances in the World Series (1974, 1977 and 1978) along with 910 victories (second-best decade in Dodger history) are certainly enough credentials for a successful decade.

Peter O'Malley was named club president on March 17, 1970 and his father, Walter O'Malley, assumed the position of Chairman of the Board.

In the 1970s, no Dodger team ever finished lower than third. In 1971, the Dodgers finished just one game behind division winner San Francisco. But in 1974, the Dodgers reached the top, winning the division and posting 102 victories, the most by a Dodger team since 1962. The Dodgers defeated the Pittsburgh Pirates in the League Championship Series, three games to one, to earn a trip to the Fall Classic for the first time in eight years.

After 23 years, Hall of Fame Manager Walter Alston retired and handed over the reins to Tommy Lasorda, who became only the second National League manager to win pennants in his first two seasons (1977 and 1978). The results were carbon copies as his teams in 1977 and 1978 defeated the Philadelphia Phillies in the League Championship Series in four games, only to lose to the New York Yankees in the World Series in six games.

During this era, the Dodgers had an infield featuring first baseman Steve Garvey, second baseman Davey Lopes, shortstop Bill Russell and third baseman Ron Cey. The foursome began playing as a unit in 1973 and would spend a record 8 1/2 seasons together.

In 1977, the Dodgers made history when four members of the team hit 30 or more home runs: Steve Garvey (33), Reggie Smith (32), Ron Cey (30) and Dusty Baker (30). Behind the plate, catcher Steve Yeager was the picture of durability. One of the best Dodger catchers in history, Yeager played 14 seasons with the ballclub and was a tri-World Series MVP in 1981." 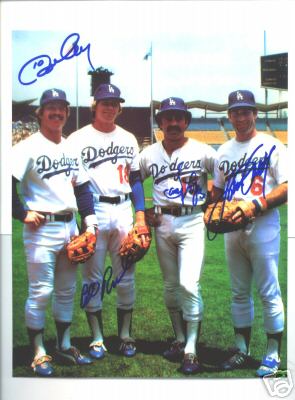 There they are again. The boys in blue, the men who made me want to be a pro ballplayer. I look at this picture and am reminded of a time in which life was far more simple.

Free agency hadn't wrecked loyalty to team and town and I could count on spending hours playing Pickle, riding my bike around the Valley and a freedom from worry that I gave up when my kids were born.

You see, part of why I like looking at this picture and reading these words is that it gives me a brief moment to look back at a very happy childhood.

I don't think that we'll ever see an infield like that again. We probably won't ever see that many players stay in one place for so long either. But I suppose that change is part of life. Nothing stays the same.
at May 31, 2006

you should tell Ron Cey that you appreciated how he treated you.

This triggers two pop culture references -
Lyrics:
We proudly wore our uniforms, just like the dodgers did ...
TV Show:
An epidsode of Brooklyn Bridge where the family is supposed to meet Gil Hodges at a signing at a bank. They come late and the bank's closed. But Gil Hodges still comes through, that leads to a line "Mr. Hodges, you're a mentsch."
I always wondered if Gil Hodges was really like that.

Jack, what's with the new pop-ups on your blog?! At least, Firefox keeps telling me it's blocking a pop-up every time I visit your site.

Jack, this is the Dodgers I remember too. I was young, but damn did I think Steve Garvey was a hottie. :) That's when the Dodgers WERE the Dodgers. :)

Yeah...those were the good ol' days of baseball... but I was still a Yankees fan... but I didn't mind the Dodgers.

Chag sameach to you too.

There is something very haimisch about those lyrics.

I checked and still haven't found anything.

Those were the days in which Bucky Dent earned the endless admiration of Red Sox fans who all eternity.

I was a big bucky dent fan growing up in Jersey. Was so upset when the yanks traded him to Texas.

It's strange how I was a yankee fan in my youth, but now don't favor any one team, just players.

Oh yeah, those were the days. I would go to the beach and we have the Dodger going as they were playing the Reds. There was a left fielder, whose name at midnight right that I can't recall, but didn't like him, I'm not sure if it was that guy or Buckner who made a number of circus catches in the outfield. Don't even get On the Mark started about Niedenfuer pitching to Jack Clark. We had tickets to that game, but I got stuck working. Baker and Reggie Smith were my favorites.

I just went Monday night with Daughter for the first time in two years, and even she didn't like the stadium or the type of crowds there now. It was nice to see Scully singing during the 7th inning stretch. Nice post!

Scully is refreshing. The sound of his voice is relaxing.