More Comments About the Cartoon Affair 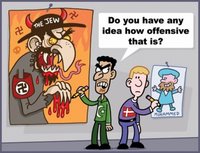 This cartoon business is very troubling to me. Daniel Pipes has written several pieces that deal with this. The cartoon at the right was pulled from an essay called Cartoons and Islamic Imperialism in which he writes:

"The key issue at stake in the battle over the twelve Danish cartoons of the Muslim prophet Muhammad is this: Will the West stand up for its customs and mores, including freedom of speech, or will Muslims impose their way of life on the West? Ultimately, there is no compromise: Westerners will either retain their civilization, including the right to insult and blaspheme, or not.

More specifically, will Westerners accede to a double standard by which Muslims are free to insult Judaism, Christianity, Hinduism, and Buddhism, while Muhammad, Islam, and Muslims enjoy immunity from insults? Muslims routinely publish cartoons far more offensive than the Danish ones . Are they entitled to dish it out while being insulated from similar indignities?"

It is a good question and something that I wrote about here. But this is not about my thoughts, rather I wanted to share a few things that I stumbled onto.

The Muslim Canadian Congress had this to say:

"TORONTO - The Muslim Canadian Congress is asking Muslim consumers and businesses in Canada not to boycott Danish products as a way of venting their justifiable anger at the Danish newspaper that printed hate filled offensive cartoons of the Prophet Muhammad (May peace be upon him). The MCC understands the hurt of the community, but feels the boycott of Danish food products by some Muslim owned stores is just another example of our community getting provoked into irrational action and validating the stereotypes that exist about us.

Muslim Canadians must express their outrage not only at the cartoonist, but also the extremists in the Middle East and London, England, who carried posters claiming, "The solution is the slaughter of those who harmed Islam and the Prophet."

In this post he suggests that this furor was fanned by the Saudi government. Read the entire thing, it is interesting and there is far too much to quote. Read the post, it is very interesting.

And let me end this post with the following:

"Professor Hilal Khashan, an expert on politics and Islam at the American University in Beirut, says he is not surprised by the anger generated by the cartoons. He notes that in almost all majority-Muslim countries the secular and the religious cannot be untangled. This leads to a natural confrontation with the European secularist view.

"The answer [for this anger] is very simple," Khashan says. "Western societies are secular. Muslim societies are heavily religious. Muslim political socialization is extremely deep and religious inculcation is essential in the raising of Muslim kids. Religion in this part of the world remains central to life and belief systems are highly important. Even highly secular political orders in the Arab world never tried to mess with religion. They never contested Islam as a system of beliefs."

In this era of globalization, Khashan continues, newspaper editors can no longer expect to be speaking to just a local audience, in this case Denmark. That can be both an advantage or present problems. "Since we live in a highly interactive world, characterized by rapid communication and access to information, it becomes extremely difficult to talk about targeting a specific audience," he notes.

But nevertheless, Khashan says this uproar may have a silver lining if it encourages what he believes is desperately needed in the Muslim world: discussion about religious reform and Islam's role in society.

"Now there's an opportunity for Muslims to start a debate among themselves, and to be honest with you, no matter what the West tries to do to get Muslims to reform Islam, it won’t work. Muslims have to think about religion and they have to revisit it [themselves] and they have to come to terms with it. Muslims must take a stand and they must begin the process of their religious reform," Khashan says.

Email ThisBlogThis!Share to TwitterShare to FacebookShare to Pinterest
Labels: Judaism

Who would have thought that a few simple cartoons would have been so effective at bringing all of the angry young muslims onto main street where the authorities can take their photos. Its a gift to those who are trying to prevent terroism...they now have photos of many potential terroists.