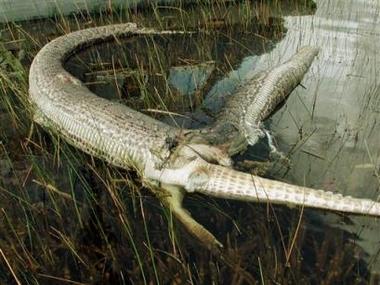 This story is wild.

"MIAMI - The alligator has some foreign competition at the top of the Everglades food chain, and the results of the struggle are horror-movie messy.

The incident has heightened biologists' fears that the nonnative snakes could threaten a host of other animal species in the Everglades.

"It means nothing in the Everglades is safe from pythons, a top-down predator," said Frank Mazzotti, a University of Florida wildlife professor.

Over the years, many pythons have been abandoned in the Everglades by pet owners.

The gory evidence of the latest gator-python encounter — the fourth documented in the past three years — was discovered and photographed last week by a helicopter pilot and wildlife researcher.

The snake was found with the gator's hindquarters protruding from its midsection. Mazzotti said the alligator may have clawed at the python's stomach as the snake tried to digest it.

In previous incidents, the alligator won or the battle was an apparent draw.

"There had been some hope that alligators can control Burmese pythons," Mazzotti said. "This indicates to me it's going to be an even draw. Sometimes alligators are going to win and sometimes the python will win."

It is unknown how many pythons are competing with the thousands of alligators in the Everglades, but at least 150 have been captured in the past two years, said Joe Wasilewski, a wildlife biologist and crocodile tracker.

Pythons could threaten many smaller species that conservationists are trying to protect, including other reptiles, otters, squirrels, woodstorks and sparrows, Mazzotti said.

Wasilewski said a 10- or 20-foot python also could pose a risk to an unwary human, especially a child. He added, however, "I don't think this is an imminent threat. This is not a `Be afraid, be very afraid' situation.'

For those who are curious this comes from a different story about this event.

"When extracted from the snake, the alligator was largely intact except for two open wounds, one to the top of the skull behind the eyes and one on the shoulder," he said adding that it was unclear how the python's gut was ruptured, or how the snake died.

I cut this out of the paper and put it on my wall. The question *I* have is where is the snake's HEAD?

That is quite disgusting. A lesson for kiddies whose eyes seem bigger than their bellies. ;-)

They suspect that another alligator ate the head.