It is your old friend Jack. I declared 2009 to be the worst year of my life and I still hold to it. The reasons why don't matter, it is 2010 now and we are doing our best to look forward. You may remember that I declared 2010- The Year of Jack. I said it, I meant it and I will enforce it.

Unfortunately the message must have gotten garbled because little remnants of 2009 seem to be hanging around. They say don't sweat the small stuff, but you a collection of little things can be a major pain-in-the-ass. You know, the whole death by a thousand paper cuts.

But 2010 is the year of Jack, so I know that the sun is going to shine again. Yesterday morning I replied to a tweet by Ralph Macchio, you know, the original Karate Kid.  It is hard not like the movie. We always like to see the underdog win, even when they face an adversary who is willing to do anything to win. 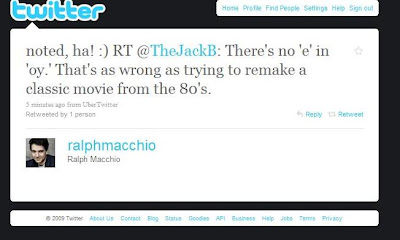 2010 is the year I figure out how to exceed my limitations and push through the crap that has been holding me back. If we use "Karate Kid" rules it may not be "cool" to sweep the leg but there is nothing wrong with kicking someone in the mouth.

Email ThisBlogThis!Share to TwitterShare to FacebookShare to Pinterest
Labels: 2010- Year of Jack, Life

(and yeah, I could never do a year of salad either, but I love my friend who did!)

I am coming over via Scary Mommy's blog today. Nice to meet you! Did you know they are making another karate kid? My friend just emailed me and told me. I am beyond excited! Wasn't that one of the best movies EVER? : )

Applaud your determination. I am confident that you will kick it this year. Pathetic pun very much intended.

It holds good memories for me, high school days.

Jackie Chan and Will Smith's son are going to be in it. Looks like it might be fun. The way Hollywood keeps doing all these remakes gives me hope that I might be a big time writer one day. ;)
Thanks for coming by.

Puns are a-ok with me. Whatever it takes to achieve my goal. Happy New Year to you too.

This is my favorite movie of all time. "If done right, NO CAN DEFENSE!"

It was a lot of fun. Every time I see Mr. Miyagi I picture him on Happy Days. Guess I am showing my age. ;)

Don't worry, I remember him too. And I somehow still pretend to be young.