Sunday night my father and I had a good old fashioned fight that reminded me of that guy that used to live in their house. He looked a lot like me, but he had more hair and drove a bitchin' Camaro. Five 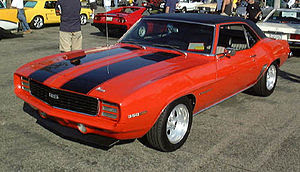 points to anyone who gets the musical reference.

Anyhoo, the old man and I screamed at each other for a bit and followed it up by glaring at each other in a way that would have melted steel. I won't bore you with the particulars of the disagreement other than to say that ultimately we were both coming from the same place, a twilight zone I like to call A Father's Responsibility.

A Father's Responsibility is a catch all for all of the obligations that we fathers have upon our shoulders and it is a load. Before the mothers erupt in a huff this isn't a competition about who has more work or more responsibility. It is not about who suffers more for the sake of the family.

Those types of discussions are bootless, fruitless and useless.

I am not the kind of guy who makes to do lists and gets off on checking off items as I complete them. I am goal oriented, but in a different sort of way. I am the guy that gets lost in thought for a thousand hours and then comes out of the day dream trying to figure out a good reason why I can't make it reality.

Not unlike most parents I have sacrificed many things for the sake of my children and my family. For many years it was a traditional set up while mom stayed home I went to work and functioned as the sole provider. It is an awesome responsibility and one I gladly took on. But I won't lie and say that it wasn't a relief to get some help there.

When we were robbed at Target it hurt for many reasons, not the least of which was because it was an affront to my fragile male ego. It is my job to protect my family and I felt like I had failed. I was face to face with the guy. It is probably a good thing that I didn't try to take him down. There is no telling what could have happened, but it grated on my nerves. I don't ever want the family to be afraid that I won't protect them because I never forget about their safety.

That is because it is A Father's Responsibility to handle that. When there are repairs to be made around the house I make a point of involving my children. There are two reasons that I do that. One is that it helps to teach them that we all have responsibilities and that they are not exempt from them. And it also provides a practical teaching experience. One day they'll have to fix a toilet, change a tire or take apart a sink.

I do my best to try to make time to play with them. It is not always easy, especially given the current economic climate. There may be some traditional role playing going on now, but I want them to always feel comfortable coming to me. I am not always as good about that as I should be.

The dark haired beauty sometimes brushes my hair while I am working at the computer. Fancy Nancy sometimes hears stories while the BlackBerry buzzes. These are moments that I struggle with because A Father's Responsibility means providing and playing. It is sometimes hard to weigh which is more important.

So I try to compromise and set aside time where the turn off the phone and walk away from the computer. It is these moments when having a home office really is a double edged sword. But at the same time who else is going to pick them up and swing them around. Who is going to wrestle and tickle them. It is A Father's Responsibility to get them totally amped up before bedtime.

Anyhoo, when my old man (he just loves when I refer to him that way) got irritated with me much of it had to do with his perception of his current responsibilities towards me. He is good about it. I tend not to hear criticism unless he sees it as a safety issue or I ask. This time I asked a question and he didn't like my response and we ended up jumping all over each other.

But the best part about taking a trip back in time was that instead of having to stew inside my room I could just get up and go home. On a side note, I probably should apologize to my mother. Our voices carry and since our cone of silence is broken she was forced to endure 400 pounds of angry men.

Later on when the dust had settled my father called and reminded me that the good news is that I only have another 30 years or so before I get to retire. I asked him why that is good news and he said, "you're grandparents are 95" the last thing I heard before he disconnected was him laughing.

He may have been laughing, but I know better, A Father's Responsibility never goes away.

You're right-- there's no such thing as retirement from parenthood. You never stop worrying, and you never stop thinking and feeling that it's your job (jointly, if you're lucky enough to have both parents in on this) to keep them safe.

It is the job that never ends. Been an incredible experience, but sometimes I wonder...

Ok, I don't wonder but I like to tease the kids about it. ;)