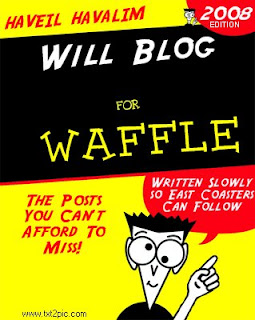 Welcome to Haveil Havalim #183, the best of the Jewish/Israeli Blogosphere. This is a weekly blog carnival in which we cover a variety of topics including but not limited to Personal, Political (Domestic and World), Judaism and much more.

This edition is called Lost But Found Again because of technical difficulties that occurred during production. I won't bore you with details, other than to say that music helped relax me so that I could reconstruct my work.

For those who are interested here is a short snapshot of what I listened to:

And now on to the carnival. If you have any questions please feel free to place them in the comments of email talk-to-jacknow-at-sbcglobal-dot-net. 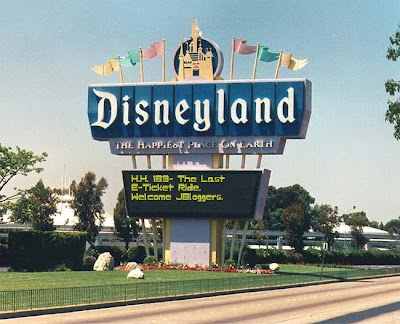 Seraphic Secret covered The Hacking of Sarah Palin. Israpundit says Mess with Sarah at your peril.

The Hashmonean shared Poll This: Obama behind negative Jewish polling?

There is plenty more on the Dems. WestBankMama thinks that More “Recovering Democrats” Surface and Bookworm is among those Questioning whether Hillary will be the October surprise.

Over at LGF you can read Iraqis Want to Prosecute Politician Who Went to Israel.

The Elder can tell you why Disney might feel a bit nervous, Saudi cleric: Mickey Mouse must die!

The Blog just might be full of crap, but it is worth reading Without a prayer.

The Fiery Spirited Zionist blogged about Yale Radicals and Elisson issued his own command, TAKE YOUR MEDICINE.

EOW discussed This Islamic obsession with goodwill to all mankind

Anecdotes: Just what are they teaching at The War College.

Balabusta in Blue Jeans has words for Dennis Prager in The Doctrine According to Bush.

The Blogosphere had plenty to say about Lauren Booth's visit to Gaza. Check out the following:

MyRightWord has some advice for Lauren Booth about using cell phones and is upset at blog censorship at the Jerusalem Post.

Rafi knows that it is all a matter of perspective. Joe Settler says it was A Healthy Reaction, but he is not talking about Jameel's waffles.

Mom in Israel wrote about her daughter's High School In Israel.

Smooth Stone shared The Myth of al-Aqsa: The Holiness of Jerusalem to Islam Has Always Been Politically Motivated.

Yoni The Blogger says that we should Be Afraid.

Shira is Of two minds on the two-state solution. R.R. is looking for A new era?

It would be a bit hokey to link to All You Need is Love before these next few posts. Instead I'll give you Band on The Run as the lead in to the Rabbi Yonah's Will McCartney risk his life to play in Tel Aviv?

SuperRaizy was prepared with Don't Threaten My Beatle!

Our next blogger shares a name with my favorite beagle, Snoopy shared Israel: too many prophets and no king and Caroline, Tzipi, Bibi, frustration...

Esser Agaroth blogged Jerusalem Demonstration In Support Of Ami Meshulam and his family.

Over at Jerusalemite you can enjoy a conversation with Laizy Shapira, Srugim director. Dan at Tzipiyah is watching Srugim and says No is also an answer.

I know more than one person who thinks that you have to be crazy to live in Israel. I don't know if I agree with that, but to be a fan of some teams requires an affinity for pain. There is a reason why the Cubbies are the way they are. But what do I know.

Benji is always in search of some excitement. Go read What Hurricane Zone???: When Boarding the House Goes Awry and I'm Alive...and Maybe I'm Becoming Israeli.

LOZ has the story of the 19th Child Born to Tzefat Mother. Bar Kochba presents Addicted to Victimhood.

This video has generated more than a little bit of controversy.

Rahel shared a tale about citizen activism and the Raggedys say that they run into Israelis all over the world.

In New York there is a thing going on with the Hotties and Hasids. At Emes Ve-Emunah there is a question Should Orthodoxy Promote Social Justice?

The Rebbetzin's Husband has thoughts about The Agunah Crisis and “End of Life” issues and Rabbinic Insecurity.

MyRightWord manages to see the Jewish element in a visit Madonna made to a Church in Rome and Esser Agaroth shared Islam is Not Immune.

At Beyond BT they are Taking the Next Step in Teshuva while Orthonomics shared Love, Marriage, and Money.

At the Augean Stables we learn that the Parisian Police Say that Attacks Are Not Antisemitic and Daled Amos wonders Why Are There Muslim Calls to Kill Jews on the USC Server.

They have a response to Questions About Aviner.

I always enjoy learning things at Balashon. Today you can read about dod. Arejewtino conducted a social experiment.

Schvach asks, Do You Really Think So? LOZ shared Throwing $ at the Shidduch "Crisis": An Explanation.

Live Immune presents Kabbalistic Speech & New Year and Avi blogged about How To Work On Your Character Traits.

A Hasid and a Heretic shared Im nin'alu -. Shira has words For those who think female leaders are immodest.

Mottel presents A Walk in Old Montreal and Go Back to the Garden you were Picked From.
Gil typically doesn't send readers over to H.H, but maybe that is why he has his own roundup of reading.

The beauty of Haveil Havalim lies in the wealth of information and posts that are offered. On my own blog I shared When I Grow Up and I Talk In My Sleep.

The Ima shares Why Spin Instructors are Like Rabbis and LOZ shared A Perfect Husband/Father and Dealing With Sexual Predators.

Here in HP offers some helpful instruction with Images Inside Links.

Who knew that Jacob is really a dog.

Mochassid has the right idea about Quiet Time. Ask Shifra has had quiet time too, but for another reason.

Gail is a proud mother. In the Pink offered Dear Lord.

Batya went to another blogging conference. She also shared how you can never plan for some things.

Ahuvah went to Tachlis2.0 as well.

It is worth seeing Ilana Davita to take a look at Favorite Posts - Part I. Don't forget to talk to Batya about the next edition of J-Pix.

That concludes this edition. Submit your blog article to the next edition of Haveil Havalim using our carnival submission form. Past posts and future hosts can be found on our blog carnival index page.

I am honored that you mentioned a post of mine. I like that postand got little feedback on it, so I really am pleases that you chose it evn though I didn't submit.

You did a great, organized and rich job. Glad it wasn't lost forever.

Wow,I am impressed that you responded so quickly. This post has barely been up. Thanks.

Wow. Long and comprehensive and well-organized and it includes me, too (and three). Super.

By the way, we you be eating wagyu this Rosh Hashana? Here.

i replied so quickly i didn't spell check - i also forgot that when i wanted to submit tonight this week it was too late and then i remembered that i had in fact submitted after the buzzer last week and that you kindly rolled it over.

thanks to selichot i am up. read all about it on my blog. extra! extra!

Jack, this is how I know an expert is running HH this week. I didn't submit anything, and there's a link to my teaching about links.

Capital job! Thanks for inclusion and now I know what it is I have against dogs...

great job, as usual. thanks for the link! have a wonderful week.
Hadassah

Thanks for the link Jack.

Thanks for the link - glad you enjoy the blog!

I love this carnival. Thanks for hosting and sorry for the technical difficulties - at least you didn't have to listen to muzak.

Jack-
So nice of you to include two of my posts. Thank you.

Terrific issue of HH, Jack. Thanks very much for including a link to one of my posts.

Hey Jack,
Thanks so much for the inclusion :)

Great roundup, Jack. I found some more great sites I didn't know about. Thanks for picking up my link, I really appreciate it, as always.

Thanks for the mention.

Very nice, Jack. You are the master!

Thanks for including me in this, Jack. Looks like my yarmukle finally came in handy.

Better late than never. I was detained from executing my Sunday "support the HH host" duties.

Haveil Havalim Numero 183 Is Up

Selichot- I have such memories from one night at the Kotel.

Not an expert by any means, but maybe one day. ;)

My pleasure. Save some Challah for me.

Glad you liked it.

You do a good job with it. Languages are interesting.

Listening to muzak is like being forced to live in Ohio, especially cleveland. ;)

Happy to do it.

You're one of the old timers. You deserve it.

Keep up the good work.

Not a master, just a regular guy.

Thank you. I'll have Jameel send you some waffles.

Thank you for a great Carnival, Jack!

was that last collective thanks a mini-HH?

Thanks for the link; I'm a bit late but somehow thought I had commented before!

Thanks for the link!

Thank you for the inclusion.

Nice job, even though I didn't submit anything: clear & easy to follow (with some cool remarks next to the links; groovy.)
Please correct the spelling of my blog name on your blogroll; should be Tikkun Olam with 2 Ks. Thanks, and shanah tovah.

Religion and State in Israel said...

any way to get on the blogroll?

Religion and State in Israel

any way to get on the blogroll?