My Israeli friends and family have a ton of stories about trips they took after finishing their initial run with the army, but I can't say that I remember any of them mentioning almost being eaten by a crocodile. 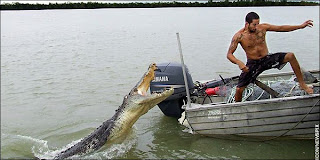 Credit for the photo and accompanying news story can be found here.

"I began playing with it for a photo,'' Mr Mashiah said. "I was pointing at it when it suddenly jumped up at me - I didn't realise that crocs were so aggressive.''

"I was shocked - the animal clearly wanted to kill me,'' Mr Mashiah, from Tel Aviv, told the Northern Territory News.

"One minute I was leaning over the boat teasing it for a picture. The next minute it burst out of the water with incredible speed ... its jaws fully open. I was shaking,'' he said."

I suppose he has never been to Hamat Gader. I don't remember Chazal saying anything about there being any special benefit to becoming croc food. Not very smart.
at March 06, 2008

Email ThisBlogThis!Share to TwitterShare to FacebookShare to Pinterest
Labels: animals

What a genius. What did he think was going to happen?

That photo is something else.

How Long will I be forced to wait...