Is This The End of The Wiggles 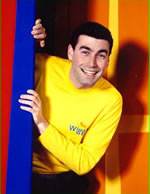 "SYDNEY, Australia - The lead singer of the hugely popular children’s group The Wiggles announced Thursday he will stop performing after being diagnosed with a chronic condition that causes dizziness, fatigue and nausea.

“It’s not a life-threatening condition by any means, but it is one that’s going to be with me for the rest of my life,” said Page, 34, who is known for his bright yellow T-shirt. “It means that I’ll no longer be able to sing and dance as I want to, and as a result I’ve decided to stop performing with The Wiggles.”

Page, who helped found The Wiggles in 1991, handed his yellow T-shirt over to his understudy, Sam Moran, who has been performing with the group for more than a decade as a backup singer and dancer.

“I’ll miss being a part of The Wiggles very much, but this is the right decision because it will allow me to focus on managing my health,” Page said."

Call me a curmudgeon, but The Wiggles just won't be the same without Greg. Can you imagine the Rolling Stones being fronted by someone other than Mick.

Ugh...the Wiggles creep me out. What's with the Star Trek uniforms, anyway?

I think they will survive.

It's a sad thing indeed. (But I can only say this because LO has outgrown them!)

Come on PT - you have to admit that you love their version of "Shalom Alechem".

I agree, I don't think they will be the same now.

have popcorn will lurk said...

I wonder how the other Wiggles feel about this. Personally, I think Anthony should have been passed the yellow shirt! MOMMA MUTINY!!

When Bagel was 3 and I was pg with Salamander and the Wiggles hadn't hit the Disney Channel yet, we got all their autographs on a hat. I'd better lock that thing up!

Hey PT - if the Wiggles creep you out, how do you feel about Blue Man Group? ;)

How sad! Greg is awesome. I've seen them in concert twice. They rock!

I borrowed one of their videos from a neighbor and it was kind of catchy. As far as I'm concerned, that much wiggling would give anyone a dizziness-fatigue-nausea disorder.

The Star Trek uniform is what made them cool.

They won't be the same.

My eldest has as well, but my little one is still enthralled with them.

Anthony is alright, but Murray is the king of guitars.

They are certainly better than a week in clevelame.

I think Page was the most "talented" of the Wiggles, th one who wrote most of the songs (and had the best voice). I doubt it will hurt them too much. They are already such an established brand that they probably are inmterchangable at this point. They have their own cereal for pete's sake.