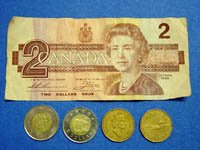 Call me what you will, but every time I see foreign currency I can't help but think of it being Monopoly money. It is hard to take it seriously, especially those wacky Canadians and their looneys and tooneys.

A pocketful of those and you'll weigh an additional 18 pounds beyond your standard weight.

And you know they have to take a wheelbarrow of that stuff just to buy a vacuum cleaner.

Then they need a forklift to buy a car.

we just got back from Canada last week and my daughters and I were joking about all the monopoly money in my wallet.

Why don't the other countries understand that the universal color for money is green?

I think that would be, “weight an additional 18 stone,” but the Canadian contingent will know for sure. Q where are you?

Australian money is made out of plastic. WITH CLEAR PLASTIC WINDOWS IN THE CORNERS!!!!!

steg - you beat me to it! It's bright, it's colourful, it doesn't rip easily, it doesn't disintegrate in the wash and we don't have annoying $1 bills to deal with... it is pretty cool!

I dunno, that design would look pretty good on a beach towel.

At least I can tell with a quick look what dollar value I am holding.

When I was in New York City I had to keep checking the numbers to make sure I was had a ten instead of a one or a twenty.

As far as the picture of the 2 dollar bill in the main post. That bill hasn't existed for quite some time. Jack you have found an antique!

lol! :-) Never seen canadian money so i wouldn't know. Thanks for the enlightnment!

It is a bit of an old joke.

Durn foreigners. Between all of dem and dese illeeeegal aaaliens....

Good question, where is Q.

Plastic? Wow, I didn't know that. Sounds kind of cool.

Too bad Denver doesn't have any beaches. :)

I like to look at my bills before paying-part of making sure that I don't overpay. As for antiques, well I learned all that from the Shmata Queen, she is much older than I.

Happy to be of service.

Oops, I missed my cue. Canada uses kilograms (or pounds, just like in the USA). Only those wacky Brits use stones.

You're right about the loonies and toonies being a pain in the arse.

But as for the jokes about our money coming in different colours? — Americans just show how insular they are when they talk like that. How clever is it to make a $100 bill indistinguishable from a $1 bill?

While US currency has all that cool engraving and symbolism that makes for good Dan Brown novels, it is in the minority most world currency isn't green, and most countries bills vary in colour. Its also interesting that most countries know what the pictures on their bills mean. What's with the pyramid thingy?

Oh well thanks to Nixon taking the US off the gold standard and making Bretton Woods irrelevant, it does not matter, we won't be using greenbacks anytime soon.

that said the loonie is too big reminds me of the UK penny.

How clever is it to make a $100 bill indistinguishable from a $1 bill?

They feel different. Haven't you noticed.

What's with the pyramid thingy?

I'd love you to tell you but then I'd have to kill you. It is an issue of national security. OTOH, if you decide to leave the dark side and join the forces of light I'll be happy to give you the secret handshake and explain it all. ;)