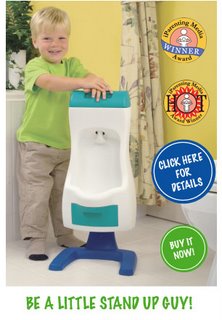 It warms my heart to see such an outstanding tool. On a serious note, it kind of irks me to see boys sit down unnecessarily. Stand tall and be proud.

With a little practice they can help extinguish a campfire because believe me, until you have experienced that little gem you haven't really lived.

Mr jackshack just to tell you my blog has gone into total meltdown. This means I am now posting photos of naked women. This si all part of my revenge against my wife so come over.

Stand tall and be proud

You forgot to mention being able to write your name in the snow ;-)

You need to buy several of them just so you can line them up side by side... and then teach the little guy where it is OK... and TOTALLY NOT OK to stand when someone else is 'at bat'.

Does it come with a Betty Crocker EZ-Bake My First Urinal Cake for aiming practice?

They need to make one in stainless steel with an auto-flush.

Jack, I swear I saw this like 2 months ago in a kids parenting magazine my wife had lying around on shabbos, and when I went to the site after shabbos I couldnt find it.

I was soo gonna blog it.

Now just add a little sink so they can learn to wash their hands.

What you do on your site is what you do. BTW, I am not clever enough to have written Datingmistress.

I am a native Californian, born and bred in LA. Snow is not in my vocabulary.

Not a bad idea.

That comes in the accessory package.

Stainless steel with an autoflush?

You are ahead of the curve.

Hilarious! Where was that when I was training my boys? I used to float cheerios in the toilet for target practice.

Ha! Too funny.... You do more funny bathroom blogging than anyone else out there, I think!

I have heard similar stories from other parents.

I have spent too many hours in the bathroom not to have a ton o' tales.

Do you really think peeing like a man is standing?! So let me tell you some thing then, not bad if you know that in my culture the male people avoid peeing while standing! In my country it's so, as my religion has recommended not to pee while standing, and to do it while sitting or squatting. I know there, they teach the kid when he can stand up, how to pee while standing, but it's not so here. However, I am male and quite healthy, but I don't pee while standing. You should consider that there are many different ways and theologies around the world.

To my own, peeing while standing is a nasty actions, also it does not feet a man's character, that's like you imagine a respectable man standing up still some where, his penis is out and his piss line in front of him! Who made the rule that males MUST stand up while urinating? And don't relate it to the nature, potentially many things are natural as an ability; one can bring it out (gun), aim and kill, but he has choosing power, although he has the ability, but he may not do it if he is sane; one can just bring it out, aim and piss, but does it mean he can not do it in a way but that?

Why stand to pee? Why aim? Aiming is for the time when you are distant to your target and can't be close to it, but when you can be close to it, and if you are sane, you prefer being close to your target than aiming to the target. So sit down and be relax, the name of the place you are doing that in, is rest room! And why you waste your time and energy in cleaning bathrooms? You can save it for more useful affairs by reducing the need of bathroom to be cleaned!

As for those who say "peeing while standing is of a few pleasures of a man!", I should say that a man is more valuable than way of peeing places as his pleasure and property! It does not fit a man to consider that as his worth! Men have more valuable special abilities to be mentioned! And as for those who say "peeing while standing is much easier than doing it while sitting or squatting", I should say that bending over and pulling down pants, and keeping a part of panties down for a while and aim for a while both need an attempt; and the fact that which one is easier for a person depends on habit. The way in which one's habit is based on, is easier for that one, and to which you habit, it will be easier for you! As God has made the ability of peeing while standing easily in guys, it must have an advantage, and yes it has. In men's jobs some times urgent situations happen, and some times they have to do some thing in a short time when the speed is important, and some times men have situations that they can't sit or squat or are in places where sitting or squatting is not easily possible; in such times they can use their ability of peeing while standing easily. But these urgent times just some times happen, not always! So I think there should be a project for men to stop, or to say better, manage peeing while standing. One group are already doing that and their site is: http://www.mapsu.org . As I mentioned, there are some occations when it's needed to pee standing up, then it happens for both men and women! So what should women do? So easy, they can instantly pee standing up using a small device, one is here: http://www.travelmateinfo.com/page002.html .
However, it will be great if the current way of peeing of guys in toilets and bathrooms, in the most parts of the world changes.

Man, I gotta say you're a bit of a moron. The Bible clearly states that men should pee "against the wall" It is not wrong, nor unhealthy, and actually is much easier for them, not because of force of habit, but because its quicker, and less complicated.
Answer me this: how do you pee in the toilet when you have a hard on and you're sitting down? It's not possible. What do you do with morning wood? I actually dont wanna know, because I'm sure its completely unnatural and probably leaves alot more of a mess than if you just stood up and took it like a man truly does.
P.S. I'm a woman who's defending a man's rights... This is just sad.