Martin Luther King and My Son 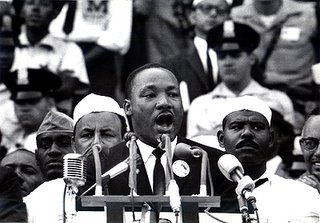 "Daddy, why did that White Boy not like Martin Luther King?"

That is how the conversation began. I was prepared to discuss this but a little surprised with the next question

"Daddy, why did that White Boy kill Martin Luther King? My teachers were confused, he didn't die, he was shot."

Technically, he was correct. Dr. King was murdered but I didn't expect a five-year-old to be discussing murder in class. Upon further discussion I found out that they had not. It was a classmate who told him about the real reasons for Dr. Kings demise.

I wasn't upset about that, but I had planned on waiting a little while until we had the discussion about murder based upon race/ethnicity/religion. That doesn't mean that I didn't think that it is important to discuss this. Sadly the specter of race/religion overshadows our lives as Americans and Jews.

It made me a little sad to have this discussion. I explained to him why it is important to judge people based upon their actions and not their color, but he asked me again.

"Daddy, why did that White Boy not like Martin Luther King?"

I did my best to give him a simple explanation that would impart a lesson and satisfy his curiosity. Not to mention that I tried to find out where he came up with a description like white boy.

It is not how we speak at home. And while the majority of our friends and family are white we do socialize on a regular basis with people who are not white/Jewish etc. And it is also one of the reasons that we made sure that he participates in activities in which he is exposed to lots of different kinds of people. My children are never going to fear someone who looks different, at least that is the plan and the goal. I don't suffer bigots or bigotry.

Nothing like being peppered with the easy questions, but I did answer all of them. As we sat their speaking it occurred to me that I could help him by using the net to locate some pictures and audio of Dr. King.

So I found an MP3 of Dr. King's "I have a Dream speech" which was delivered 28 August 1963, at the Lincoln Memorial, Washington D.C. I get chills listening to that speech. There is a story behind that but I'll save that for a different time. Here is one of my favorite excerpts from Dr. King's speech. It is also probably the best known.

"And so let freedom ring from the prodigious hilltops of New Hampshire.

Let freedom ring from the mighty mountains of New York.

Let freedom ring from the heightening Alleghenies of
Pennsylvania.

Let freedom ring from the snow-capped Rockies of Colorado.

Let freedom ring from the curvaceous slopes of California.

But not only that:

Let freedom ring from every hill and molehill of Mississippi.

From every mountainside, let freedom ring.

And when this happens, when we allow freedom ring, when we let it ring from every village and every hamlet, from every state and every city, we will be able to speed up that day when all of God's children, black men and white men, Jews and Gentiles, Protestants and Catholics, will be able to join hands and sing in the words of the old Negro spiritual:

Thank God Almighty, we are free at last!

I agree about the chills. Our local NPR station plays various speeches of his on MLK Day, in their entirity. I listen to them on my way to work, and I feel truly overwhelmed by the power of his voice.

This is from someone who often laments to himself that he is very emotionally cold for his own taste. Holidays never move me as much as I think they should. Tehilim, Tisha B'Av, powerful, poetic, and emotional readings and days leave me moved but in control.

Listening to MLK though, that shakes me to my core. I think the fact that you can listen to the real conviction in his voice, and the fact that the words are his, is what does it to me.

My personal belief is that I will know moshiach has come when I hear him speak, and he has the same effect on me, except more, and speaking of God in a way that we know is true.

That is an interesting thought.

A very splendid tribute indeed to a man whose greatness is even further magnified by the farcical nature of the charlatans who have "succeeded" him. When King died, we all plummeted off the mountaintop.

I remember ... when years back as a high school teacher, I showed my classes the I Have a Dream speech. All I thought had gone well until just after one of my classes had ended ... one of my students approached the TV, saw King's face on the screen and "shot" him, as it were with her make believe pistol fashioned from her fingers! But for a moment I stared in the face of hatred: cold, calculable but impassioned! I was stunned! A kid whom I liked too!

In sharp contrast, my son Ben Z"L-in defense of his friends, many of whom I disliked, would often remind me that it was I who had taught him to not judge another human being by the color of his skin but by the content of his character! In my case however, it was never a question of skin color or ethnic origin; rather was I accused of making erroneus and superficial evaluations of his friends based upon my dislike of their mode of dress and outward appearance: hairstyles, earrings, tattoos about which Ben was perfectly cotrect ... I was guilty as charged! AS a matter of fact, I can recall no group of people-outside of family-more pained, anguished and crushed by Ben's death than his friends! That day at the graveside and thereafter when they lingered in sobbing disbelief .. I shall never forget!

How often have we all heard it said that "charity begins at home".
So true! But to add just a bit more of a Jewish twist ... so do chesed, gemilus chasadim, rachomim, and ahavas sinam!

It is always very "nachasdik" for me to reflect upon how well my son learned this lesson ... of what it means to be a "mentsch"!

Sounds like you have a great kid there Jack!

wow. that is a tough set of questions! i had to memorize this speech in college and recite it for speech class. i agree on chills. it is amazing. there are none left like him it seems...i agree with alan about king's "successors."

In my opinion MLK's I Have A Dream speech is the most incredible speech given. When I listen to it I am transported to that day and time (a year before I was born) and am swept away by the ideals he spoke of.

With my kids, these conversations began when my oldest was in kindergarten and his school celebrated MLK's birthday. It is, in some respects my favorite time of year. It gives us all an opportunity to stop and think about things that really matter.

Ever since those kindergarten days, I have had a range of conversations with my kids about how people should be treated. While it seems odd to discuss these things with them, I prefer it to the approach my parents took -- nothing of substance was discussed, except in a perfunctory way.

Recently, we took our kids to the Museum of Tolerance for the first time -- at an age when some people might think it's an inappropriate. It doesn't matter to me. Kids need to be exposed to the realities of life (that the white boy killed him or that black people couldn't do things simply because they were black) and our world so they can do better.

I also get chills from that speech. It is so hard to comprehend slavery and to come to terms with the fact that the Civil Rights Movement is recent history, not ancient history.

Thanks for stopping by, I always appreciate your comments.

My BS, Soccerdad and Stacey. This is such an important time and part of our history.

Thanks for the link, Jack. I've never heard the speech in its entirety, but I'm downloading it right now.

Like everyone else who has commented, I get chills when I hear Dr. King delivering one of his speeches. Words can be so very powerful, when combined with a willingness to lay your life on the line to back them up.
Q

It is my pleasure.

Figure this as a placeholder for a letter to SQ.