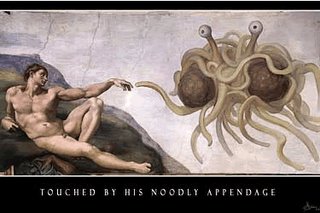 So Kansas has given in and now we shall see some sort of nonsensical blathering about Intelligent Design be offered as a potential alternative. But like all good things we can be certain that the fine folk of the world will lobby for inclusion of another theory, that of The Flying Spaghetti Monster.

I admit to being intrigued by these practitioners of pastafarianism in the same way that I look at short men with Napoleonic complexes. It is a rather bemused expression, albeit tolerant.

For a more serious look at ID take a gander at this article.

Nice post it is kind of shady how people are putting religion into evolution. I seen something about Bush and this topic at pudtz.com

You forgot about the Holy Zoboomafoo!

Intelliegent Design can never be disproved - the absence of evidence will never be the evidence of absence. That's the whole point. It's like those sixteen words - how will ever prove the British government did not learn about Uranium in Africa? You can't. Even if you learned that they didn't believe, you can't prove they never learned it.

These two things are related because of the technique. Bush and his cabinet would never send their kids to ID schools - but they want others to.

But ID can be disproved as a scientific theory.

Actually, I don't think it can really be disproved. It just can't be proven, which isn't exactly the same thing. Proving B (evolution) doesn't necessarily disprove A (intelligent design or creationism).

There is a train of thought among a minority of people of science and faith that a less literal version of creationism could coexist with evolution.

Hey Jack,
Another good argument for those Pastas believing individuals..

Thanks for the link to techcentralstation. Looks like an interesting site.
Q

Finally home and had a chance to read the techcentralstation article. That makes a lot of sense - if you can't disprove it, it can't be considered scientifically quantifiable.

The people that want to teach ID as science aren't reasonable, logical people though, which makes it quite difficult to have a meaningful debate with them.

Does the Spaghetti Monster strike down those that sin with meatballs?

Intelligent design? That explains the crooks who rob a bank a block away from a large police protest. It actually happenned in Toronto!

Reasonable people are so much easier to deal with.

Smart crooks are so mo much fun.

How Long will I be forced to wait...