Pictures of the Disengagement 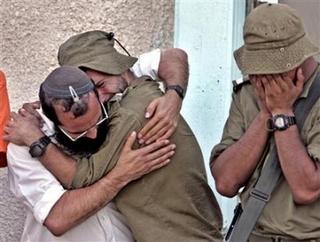 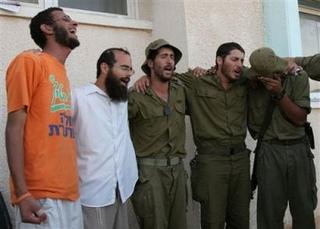 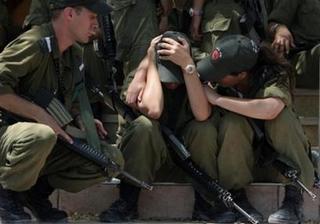 You have to feel for some of these soldiers, having to forcibly remove fellow Jews from their homes. If they're as conflicted about the disengagement as other Jews seem to be, they'll be carrying out orders despite strong personal reservations.
Q

Thank you for posting these. They're beautiful.

I like these because they show the human side. This is a very complex issue. There are no easy answers, so I wanted to show that. And FWIW, had I found some good shots of the protestors and the soldiers I would have included those too.

They really touched me, especially coming on the heels of Tisha B'Av.

there arent too many words to discribe these pictures. as they say. a picture is worth a million words.
but sometimes they can just silence you.. and kind of leave you in awe.
I'm personally at a loss of words.
thank you jack for the photos.

Those pictures capture my emotions of the past two weeks. I've been more confused with my Jewish identity than ever before. When I saw those pictures I broke down and my eyes teared up a little bit.

Very moving and heartbeaking. Thanks for sharing.

What an amazing photo. My heart really goes out to the soldiers as well. May G-d bless Israel.

Thanks for stopping by. :)