Goodbye Scotty- Someone Finally 'Beamed You Up' 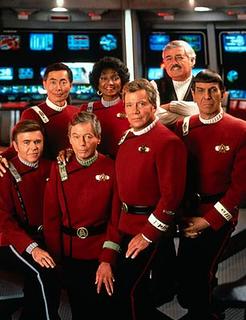 "LOS ANGELES- James Doohan , the burly chief engineer of the Starship Enterprise in the original "Star Trek" TV series and motion pictures who responded to the command "Beam me up, Scotty," died early Wednesday. He was 85....

The powerfully built Doohan, a veteran of D-Day in Normandy, spoke frankly in 1998 about his employer, Paramount, and his TV commander:

"I started out in the series at basic minimum_ plus 10 percent for my agent. That was added a little bit in the second year. When we finally got to our third year, Paramount told us we'd get second-year pay! That's how much they loved us."

He accused Shatner of hogging the camera, adding: "I like Captain Kirk, but I sure don't like Bill. He's so insecure that all he can think about is himself."

James Montgomery Doohan was born March 3, 1920, in Vancouver, B.C., youngest of four children of William Doohan, a pharmacist, veterinarian and dentist, and his wife Sarah. As he wrote in his autobiography, "Beam Me Up, Scotty," his father was a drunk who made life miserable for his wife and children.

At 19, James escaped the turmoil at home by joining the Canadian army, becoming a lieutenant in artillery. He was among the Canadian forces that landed on Juno Beach on D-Day. "The sea was rough," he recalled. "We were more afraid of drowning than the Germans."

The Canadians crossed a minefield laid for tanks; the soldiers weren't heavy enough to detonate the bombs. At 11:30 that night, he was machine-gunned, taking six hits: one that took off his middle right finger (he managed to hide the missing finger on the screen), four in his leg and one in the chest. Fortunately the chest bullet was stopped by his silver cigarette case."

I remember being shocked to find out that he wasn't actually a Scottsman.

Color me surprised as well. It just made sense that he would be.